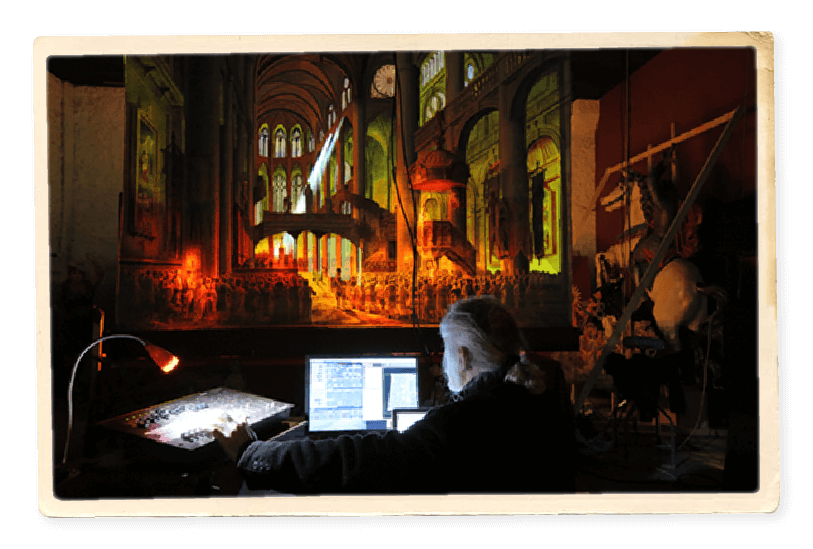 «Showmen used beveled mirrors, mercury pearls, brass, copper, gold and silver plating as well as fine arts techniques such as labyrinth-like sculptures and carved panels to amaze the crowds and put them in a dream-like altered state of consciousness. The new digital era and new lighting techniques have provided me with the tools to showcase the objects with lighting and video projection and therefore captivate through illusion. Yet I also use pictorial items found in nature where often one image can hide another. »

Video projection to showcase the objects

Jean Paul Favand wasn’t fully satisfied by the precision of traditional lighting technologies to highlight his objects, so he quickly turned to video-projection. This new technology enabled him to precisely light the objects and guide the visitors’ eyes in his object-staging approach. Within the Théâtre du Merveilleux – similarly to 18th century cabinets of curiosities – Jean Paul Favand brought together Naturalia – natural curiosities – and Artificialia – man-made curiosities. The use of the video-projection also gave birth to a new form of curiosities: Virtualia – a new way to understand the objects using digital technology to enhance the curiosities.

Unlike the concept of “digital art” as a form of contemporary art based on immateriality, Jean Paul Favand uses the 21st century digital technologies to draw focus to the object. The videoprojection offers the possibility to cut out the object, change its colour and give the impression of motion as a tribute to magic lanterns and other pre-cinematic technologies.

«  At a time when the digital is ruling more and more aspects of our lives, I am delighted to have the liberty to use it as a means to reveal the existing. My demarche fits within two principles: humanize the digital and appeal to the sight, my intervention being limited to my perspective and the way I stage objects to respect their material authenticity »

The illusions of the Théâtre du Merveilleux

In the 19th century, the “Théâtre du Merveilleux” referred to a form of shows using the industrial revolution’s special effects to amaze the crowds.

The Théâtre du Merveilleux created within the Pavillons de Bercy is a 1800sqm cabinet of curiosities dedicated to illusions. It pays homage to Roberston, a famous magician who used to project magic lantern images on smoke screens creating the first instance of moving images. Today, the visual illusions are recreated by 12 video-projectors and 1200 light sources. The projections on the three dimensional surfaces of the Naturalias and Artificialias create interplays of light and shadows bringing the objects to life. Petrified wood and wax characters are used as a medium for three dimensional virtual creations and a 10m long organ can be transformed into an Indian palace or Captain Nemo’s Nautilus. The modern digital technologies also offer the possibility to combine the optical effects with sound orchestration. In a unique arrangement of sound and lights in the Théâtre du Merveilleux, a 1925 ballroom organ, composed of 12 instruments can play a waltz along with 40m long wall carillon.

The merging of traditional and modern transforms the objects into live parts of the display, creating a new form of interaction with the visitors. This unique display was created at a time when digital technology was usually only associated with television. In this museum, it brings back to life illusions worthy of the magical extravaganza of 19th century fairs.

For Jean Paul Favand the digital is simply used as a tool to reveal the object in a different way, inviting the spectator to see the objects from a new perspective.

For the unicorn astrological game, pieces of uniquely shaped wood from all over the world (Philippines, French Guiana, Namibia ) are brought to life by three video-projectors. The game was designed for the Théâtre du Merveilleux in 2003 and is based off of a 1920’s lottery table. The winners are presented with a short animation about their zodiac sign projected on the 8 by 11m scenography of petrified woods, offering a poetic illustration of their main personality trait.

In 2003, software was created that could assemble the images of several videos. Such programs were rare and complex; creating these digital projections at the time was a real challenge. After a year of failed attempts, Mr. Favand’s dream came true thanks to Jacques Remus who created a special computer program based on a software developed by MIT (Massachusetts Institute of Technology).

The Salons Venitiens’ magical show “Venice the Serene” 4D was created in 2012 to pay tribute to phantasmagorias and mechanical shows.

It is a 4 dimensional show that brings ancient artifacts back to life through modern illusion techniques. It took 14 months to create this extravaganza bringing together graphic designers, IT engineers, light specialists, mechanics and musicians.

In front of a Venitian panorama from the 1880’s, six automaton boats from a 19th century mechanical theatre sail thanks to modern digitally-controlled engines. In order to replace the former Magic Lantern technique, 11 video-projectors and numerous light sources immerse the visitors in a 500sqm image. The room is entirely transformed into a dream-like Venice. The walls turn into the façade of a Venetian Palace with its fountains and torches by projecting the images onto the room’s architectural components.

The immersion is thanks to a 12 channel directional sound system that plays the show’s soundtrack.

This show fits in perfectly with the objects housed in the Pavillons de Bercy, expounding upon the already incredible augmented reality shows in the Théâtre du Merveilleux.

With Venice the Serene, Jean Paul Favand has created a 5 minute long timeless voyage for the museum’s visitors.

By projecting large images onto objects and architectural structures, through the years,  Jean Paul Favand has developed his own video-mapping technique without really trying.  He was a pioneer in the use of digital technology in this kind of setting, turning the Pavillons de Bercy into an innovation lab and think tank.

Today, a part of the premises is dedicated to the research of new staging techniques and technologies.

Jean Paul Favand also uses this digital approach in his personal work by creating his own digitally enhanced artworks. His work was featured in several off-site exhibitions, like the Centre des Arts of Enghien-les-Bains in 2013 and at the Laval Virtual show in 2018.