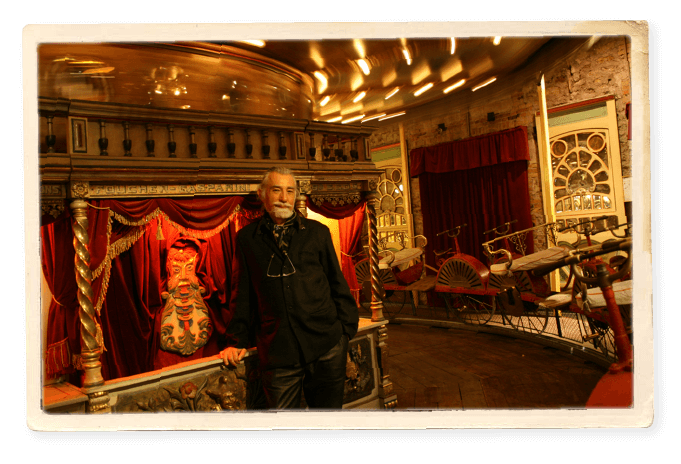 The eclectic career of a poineer : The tribulum and Louvre des Antiquaires

As a young man, Jean Paul Favand had two passions, acting and antiques. He was part of a theatrical troupe and always hunting for objets-d’art.

In the 1970’s he created the Tribulum, an antique shop where one could find “curiosities”, art brut, folk art and traditional fairground items.

In those days, these meaningful objects had not yet achieved recognition. Jean Paul Favand quickly realized the impact these objects could have if carefully staged and displayed.

A few years later, at 30 years old, he imagined the innovative concept of an antique centre in the heart of Paris. In this Louvre des Antiquaires, he staged his first entertaining exhibitions focusing on toys, lost treasures, witchcraft and fairground art.

At the same time, he organized numerous exhibitions and large-scale projects abroad, in Japan, Europe and the Middle-East such as the scenography of the Maghrabi center in Jeddah. In Paris, his talent for exhibition design and heritage preservation led him to recreate a monumental funfair for the opening of the Forum des Halles, a new shopping center. Consequently, in 1980, Jean Paul Favand was given the “Heritage of the Year” medal for his work in the preservation and staging of fairground artifacts.

In the 80’s, the Tribulum antique shop became a bistrot / art gallery in the center of Paris in Les Halles. The Tribulum-bistrot was one of the first themed bars in Paris.

“In my antique shop, people meandered, being more interested in looking than buying. This gave me the idea to create a bistrot with a convivial atmosphere where my objects could be seen. Instead of paying for an admission ticket, the visitors would pay for food and drinks.”

From the collection to the museum

Along with his antique business and other activities, Jean Paul Favand has been acquiring, preserving and restoring objects of curiosity since 1972.

The amount and size of these accumulated items – including complete carrousels – led him to search for an appropriate place to house these treasures.

After moving out of his Parisian workshop, he established his collection in a warehouse in a former industrial plant in Gentilly (1988-1993) where he created the first Musée des Arts Forains (Museum of fairground arts)

His collection then moved back to Paris, rue de l’Eglise in the 15th arrondissment ( 1993 – 1996 ) before finally settling in the Lheureux wine cellars, Bercy in 1996.

The current Musée des Arts Forains is formed from a combination of all these experiences.

In Bercy, Jean Paul Favand has become the ringmaster of a new economic model: A self-financed museum, able to preserve its heritage and also to finance new artistic productions.

1970 : Jean Paul Favand creates the Tribulum antique shop, which will become the Tribulum-bistrot

1977 : Creation of the Louvre des Antiquaires

1988 : The collection is established in Gentilly

1993 : The Musée des Arts Forains moves to the 15th arrondissement within the former Citröen car plant.

1996 : The Musée des Arts Forains finally settles in the 12th arrondissement and is renamed is renamed « Pavillons de Bercy »

1996 : « Comité Régional du Tourisme d’Ile-de-France » award for the creation of his entertaining museum