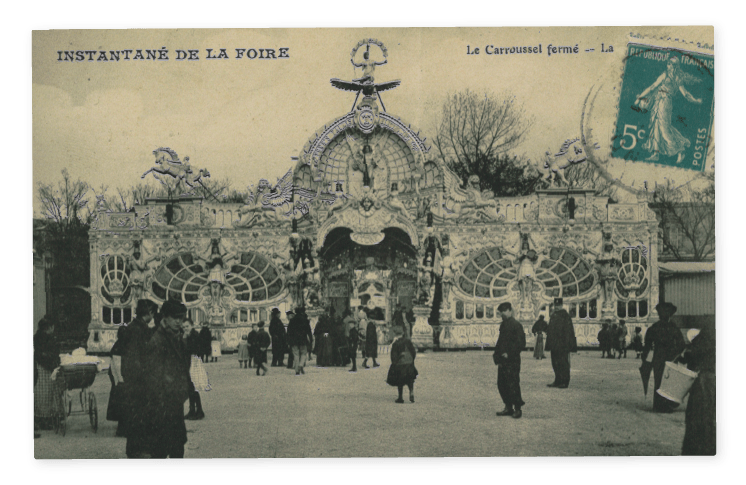 The funfair: the origins of a phenomenon

If the fairs were mostly a trade environment in the 18th century , in the 19th century they became festive places dedicated mostly to entertainment. This mutation is a reflection of the political and economic changes in the society.

First, the French Revolution brought a new ideology of freedom and secularism, replacing the important religious celebrations by new popular events. Then, the Industrial Revolution was the stage of a mass rural exodus dragging the population toward large cities and industrial hubs. The population uprooting and loss of traditional values carried by the urbanization opened the way new forms of secular gatherings based on modernity and innovation. It gave birth to a new social phenomenon: the funfair.

Between 1850 and 1900, fairs conveyed a new image of happiness rising from the idea of progress in a society dreaming of a Modern Paradise. In parallel to spreading the innovations of the industrial era, funfairs offered a breakaway in a world of freedom, exuberance and baroque daydream to the populations impacted by industrialization.

At its peak during the Belle Epoque, funfairs reflected the dreams and desires of all those who came to mingle and be amazed.

During the major medieval trade fairs, apart from merchants only two professions were allowed to own a booth: the gold-weighter making money exchanges (whom later became a banker) and the Saltimbanque who jumped on benches and became barker.

The role of showmen or barker was to drain the public to the fair’s most spectacular attractions. Until the 18th century, jugglers, theatre and puppet shows were the main entertainments.

Showmen, being both artists and merchants, quickly understood the concept of advertisement. With an empirical method they used all means of fascination (sight, hearing, smell…) to attract and to entertain. The barker’s eloquence had to attract the crowd before it reached a rival’s checkout similarly to mechanical organs, merry-go-rounds bells and ticking sounds from shooting galleries, lotteries and strength testers.

Because of the temporary aspect of funfairs, poster advertisement was used very early and at a very large scale in order to inform the crowd. Similarly, cinematographs were used to film reports and broadcast them at the fair as a form of local information, ancestor of our TV news.

From merry-go-rounds to stalls, everything was designed to differentiate the fair from settled businesses using bevelled mirrors, twisted bars and curls to stimulate dizziness and hypnosis.

Not forgetting the light effect and the fairground confectionaries that provide the funfair with its traditional smells and tastes: candy floss, coconut, marshmallow, toffee apple, gingerbreads…

Soon after the Second World War, most of the funfairs theatres, museums, zoos and cinemas progressively disappeared from fairgrounds to settle on their own. If lotteries and shooting galleries can still be found in funfairs; nowadays most rides feature outstanding speed and dizziness.

If the fairs used to be places of amazement inviting to an imaginary voyage, the contemporary funfairs offer a physical adventure. Modern rides and fairground attractions put the visitors into extreme situations to stimulate their taste for challenges, performances and riskless exploits.

Pour aller plus loin :
Showmen as science popularisers
Fairground arts : a decorative art in its own right